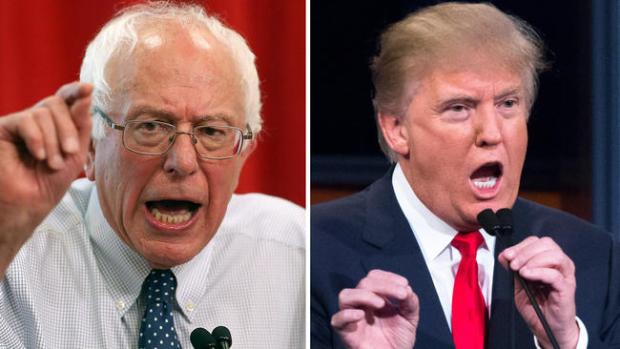 Many pundits say Bernie Sanders and Donald Trump are political opposites. Bernie is a leftist and Donald is right wing. What does that mean?

Liberals reside on the left side of the spectrum. Progressive is synonymous with liberal  because liberals favor brisk and continuous political progress. Liberals tend to promote government spending and levy more taxes to cover the cost of programs to spur progress.

Extreme liberals see business as a means to achieve humanity’s preferable end: Utopian actualization motivated by government influence in the form of funding and regulation.

Extreme conservatives abhor progress to the degree of time-reversal. They promote a return to a mythical past. Humanity cannot find its way forward because it has forgotten what brought it here; we will never achieve our destiny now that we abandoned what works best.

These fundamental philosophies clearly diverge. Using the linear spectrum model, the distance between the two dispositions widens as each political journey progresses. The effect is a palpable sense of polarization.

Where does the linear spectrum lead our disparate philosophies? Do conservatives succeed in reversing time’s arrow? Does liberalism collectively teleport us to heaven on earth?

Extreme politics, right or left, share crucial characteristics: policy ignorance and inability to compromise. Extremism relies on the force of will: Extreme personalities lead extreme politics. The end result of extremism is failure to achieve ridiculously optimistic short-term goals. Once failure is certain in the public perception, tyranny remains as the only option to loss of power.

The path of of extremists, left and right, converge in authoritarianism. The political spectrum is not a line; it is a circle.

The circumference of a circle is a linear measurement. If a circle is large enough relative to the our senses, it appears straight when traversing its surface. Straighten a meter of string. Now, shape the string into a circle. That’s how easy it is to change your thinking from linear to circular politics.

Here’s another way to look at it: Earth seems like a flat plane to our senses. We’re so small compared to our universe, and planet, that we failed to realize earth’s true geometric shape for most of humanity’s existence. A sphere is a three-dimensional circle. Before modern mathematics and the scientific method, common sense indicated walking in one direction would lead to an edge, or a walk without end. Now, we know walking in one direction on earth eventually brings us back to the starting point.

If you liked Circular Political Spectrums, try these: Poles Apart, A republic if you can keep it.