We humans are victims of common sense. If something is common to me then it must be common to all of us. Unfortunately, vast–and also tiny–sectors of the universe are uncommon to our senses.

The first step to develop a working knowledge of quantum physics is to abandon your belief that anything valuble should fall within the bounds of common sense. Do not worry that I will burden you with an explanation of Schrodinger’s Cat. You probably would not understand me. Honestly, I do not think I understand it. No one really understands Schrodinger’s Cat.

Quantum means small, subatomic small. The word subatomic is a self contradiction. Atom means smallest. According to its most basic definition an atom cannot be broken into smaller parts. Essentially, subatomic means smaller than the smallest.

The word atom represents an influential philosophical breakthrough. Atom arose from the Ancient Greek word, atomos. In the 21st century, we know atoms are not smallest. But just the idea that all matter is made of tiny, indivisible things was a tremendous realization.

Fundamental is probably the best word to represent these tiny, indivisible things.

Our common sense often informs us that nature is fluid and infinitely divisible; continuous may be the best word for this apparent fluidity of the universe. Water running from a hose seems to be a continuous flow of stuff that we can keep dividing forever.

A number line is an abstraction. The abstraction only applies under ideal conditions. Experimental evidence indicates that a water stream can be divided into a finite number of discrete particles called water molecules.

An electron is so small that looking at one would change its nature. We see objects when photons reflect off those objects: the photons deliver information to our brain via our eyes.

An electron is so small that when a photon bounces off an electron, the electron’s nature is changed: the reflected photon delivers outdated information about the electron to our eyes.

Classically speaking, an electron is not observable. But when not observing an electron it is not really there. An Electron is everywhere in space-time when not observed. It is more likely to be in some places and times compared to others but we can never know for certain. Once observed, the electron becomes what the observation compels!

Fifteen thousand years ago it’s probable that all humans banded together in hunter-gatherer clans of 50 to 100. That’s the way we survived for thousands of generations. Subsistence in permanent settlements is relatively novel for our species. Although we have spread world wide on the waves of an agricultural revolution, we thrive on the heart of a fundamentally nomadic species.

Most human brains can’t maintain more than 100 concurrent relationships. Apparently, this is the number when alpha male rivalry drove apart prehistoric nomadic clans. (Try a little test: write down all the people you interact with, face to face, in an average month. I bet you’ll struggle on your pass 50.)

Social media may be a development on par with the printing press because it allows us to engage in hundreds (thousands?) of concurrent relationships, and get past evolutionary cognitive barriers. Ultimately, this new connectedness could generate a hyper-level of creativity. Add this connectivity to the advent of quantum computers—they should be  available in about 30 years—and we might become a completely interconnected species.

What is a quantum computer? Ordinary computers communicate via binary mathematics: All instructions are coded as ones and zeroes, value and no value.

For an obvious reason, humans prefer to use a numerical base of ten symbols: 0, 1, 2, 3, 4, 5, 6, 7, 8, 9. We start repeating these symbols in different positions and arrangements to represent any quantity on the number line.

All the familiar mathematical operations are possible using only 0 and 1. For example, a base ten 7 is equivalent to 111 in binary. Seventeen is 10001 in base two. I won’t explain how to translate from base two to base ten or visa versa. Just take my word for it.

Computers only have two fingers or I guess you could say the computer alphabet only has two letters. Computers make up for this weakness by processing the 0’s and 1’s rapidly. For example, my computer can do 2,660,000,000 actions every second.

Each 0 or 1 represents a bit that is or is not. Quantum computers have qubits. A qubit is allowed to occupy both value and no value simultaneously. Don’t feel bad if you don’t completely understand; no one really understands quantum physics. Here’s a good example to help you understand the power of quantum computers: If you wanted to find your way out of a complicated maze and, try all options until you discover a correct path. That’s what ordinary computers do, but they do it faster than humans.

I’m sure you can imagine a maze so complicated that my 2.66 GHz processor will get bogged down and take a long time to find a solution. The perfect solution to escape the maze is to try all paths simultaneously. That’s what a quantum computer would do; I guess you could say exponential technological growth becomes essentially vertical. 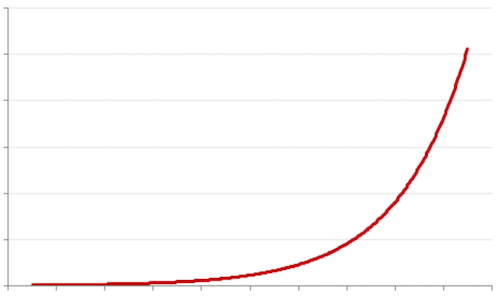 If you enjoyed this post, try Binary Fraud or De-frag Brain.

Why do humans insist on categorizing everything? Is the human brain a series of discrete, isolated compartments where information is stored-retracted via a master distribution-acquisition system?

Not only do our brains seem fragmented, but also, we are supposed to only use certain parts of our brain once we decide which functions to employ. If you are good at linguistics then you cannot be a mathematician. Those with strong math skills should devote most time developing mathematical prowess. Math is generally perceived as difficult and practitioners of the craft are in short supply, so it is almost a duty to do something with that rare gift.

Using more than one part of your brain in the same thought, or series of connected thoughts, is implicitly discouraged. Specialization is the key to a rising academic status. Education creates human blocks of expertise and then the blocks are stacked to create progressively more complicated structures. This is how we built the foundation of modern civilization, no?

During childhood—actually it continues into the early adult years, through college—a series of strategically timed bells dictates when it’s time to utilize a different part of the brain. Some say school bells had an even more basic purpose when they started ringing during the late industrial age. The bells conditioned students in preparation for a life on the production line.

Knowledge divisions are logical but arbitrary: language, social studies, math, science and art. Each discipline competes for time and influence in a zero sum game. Remember: Individuals must eventually choose only one focus subject.

Double majors are a chore and held in high regard, but they are an exception to normal, and the two fields are almost always closely related: math-computer science, electrical-mechanical engineering, English-history… When was the last time you heard of a math-history double major? I am sure it happens, but it’s rare.

In a display of equity, policy dictates each subject gets equal time. This is absurd because we all know science requires lab activity on top of classical instruction, and math is difficult to learn without problem solving exercises with teacher assistance. There is some correction for this absurdity in college: math and science classes often get four or five credit-contact hours while most other subjects only get three.

The grand prize of education is a Doctorate of Philosophy. A Ph.D. is an expert in one sliver of the knowledge spectrum. To earn this lofty distinction, one must make a unique contribution to some field. A Ph.D. knows something that is obscure to the rest of humanity. A doctorate is almost universally required to be a professor.

Essentially, a professor knows everything about nearly nothing, and they teach it to very few.

The dutiful researcher is at the top of the educational food chain. Researchers typically avoid the classroom; when professors do share their knowledge with the masses it tends to be in the form of caned lectures to hundreds of young adults. The grand cathedral of knowledge is mostly available only to people who have yet to acquire any significant measure of wisdom.

Teaching assistants tackle the details of coursework in recitations. Professors answer questions too, but only during rarefied office hours or brisk appointments.

The whole process resembles an assembly line when viewed from a distant and detached perspective. We manufacture individual cerebral parts and bring them together to make a working machine of sorts.

Not that this is all bad but with technology making information more accessible, it seems the skill most needed is the ability to process ideas from as many parts of the information spectrum as possible. We do not need a learned professor to divvy out parcels of knowledge according to a four-year plan anymore.

All we need to know is out there in the ether waiting for us to access it. If anything needs to be taught formally it’s how to bring all this accumulated knowledge together in one fluid motion of thought.